Over a month and a half has passed since the Narendra Modi-led government scrapped Jammu and Kashmir’s special status, and bifurcated it into two Union Territories. However, the outrage over the abrogation of Article 370 and the protracted lockdown in Kashmir refuses to subside in the neighbouring state of Punjab.

Left and Panthic groups have been carrying out protests across the state, voicing their opposition to the Narendra Modi-led government’s move.

On 15 September, around a dozen outfits – mostly farmers groups, trade unions and Left-Wing students’ outfits – planned a massive march to Mohali in a show of solidarity with the people of Kashmir. The protest was coordinated by the Kashmiri Qaumi Sangharsh Samiti of Punjab.

However, the district administration of Mohali withdrew permission for the protest and blocked several entry points into the city. As a result, people marching from different parts of Punjab conducted separate protests in places they were stopped by the authorities.

Protests were reportedly held across at least 14 districts in Punjab. Several national and state highways were blocked by the protesters.

Protests were particularly intense in the Malwa region districts like Bathinda, Barnala, Mansa, and Sangrur, where the influence of farmers’ unions and Left outfits is especially strong.

Interestingly, Left outfits in Punjab have been more proactively protesting in solidarity with Kashmiris than their counterparts in other parts of the country.

Demonstration During Modi’s US Visit

These outfits, which also have compatriots among the Sikh diaspora, have lent their support to the protests being carried out against Prime Minister Narendra Modi during his visit to the United States from 22 September onwards.

“We are upset with what is happening in Kashmir. The voices of Kashmiris have been suppressed. Neither the Supreme Court nor the press have done enough to make their voices heard. We will protest in solidarity with the people of Kashmir,” Simranjit Singh Mann said. 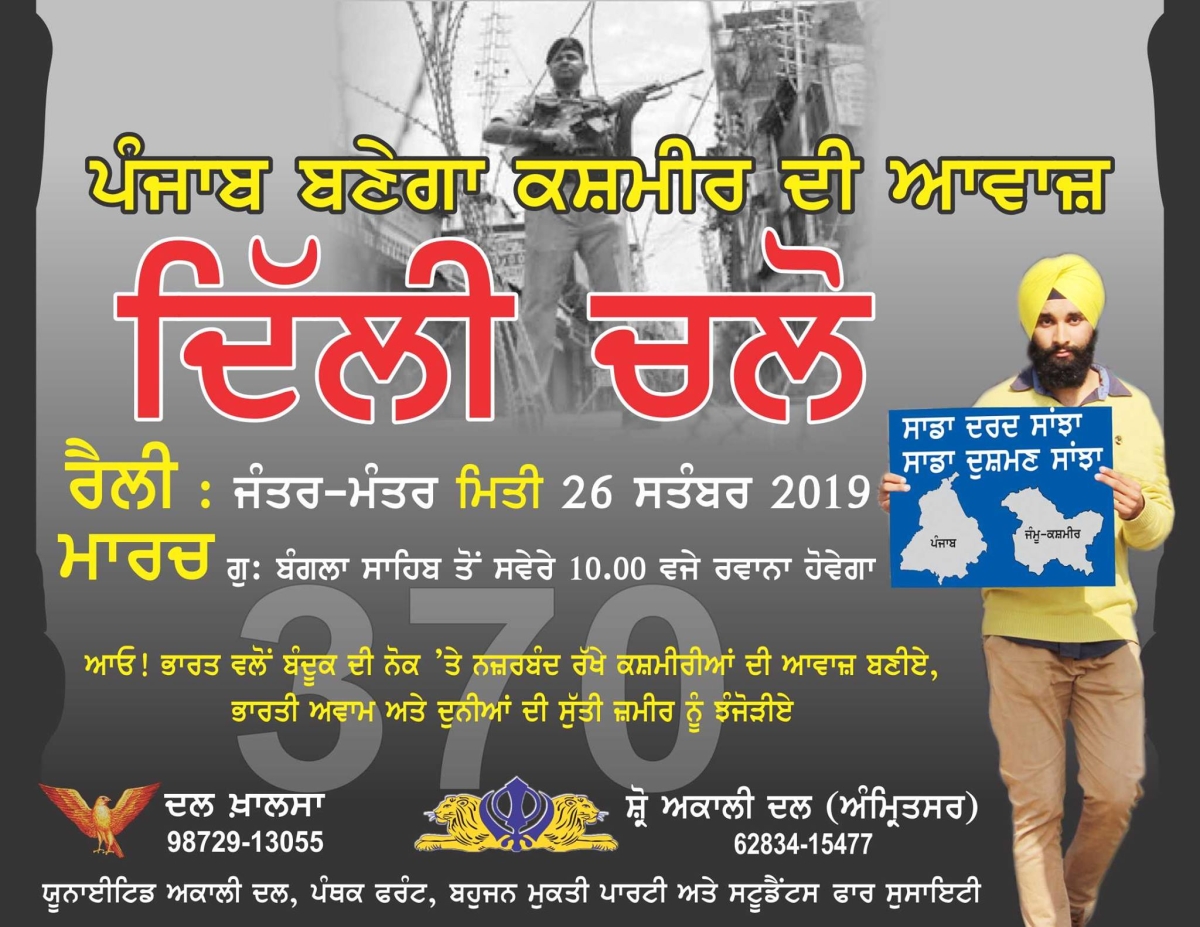 The Dal Khalsa poster above sums up the sentiment behind the protest in the slogan “Punjab Banega Kashmir Di Awaaz” (Punjab will become the voice of Kashmir).

Another common poster being used is of the maps of Punjab and Kashmir together, with the words “Sadda Dard Sanjha, Sadda Dushman Sanjha” (Our pain is shared, our enemy is shared).

Though there has been no formal coordination between the Left and the Panthic groups over the Kashmir protests, there have been a few occasions wherein individuals from the organisations have come together. For instance, former Panjab University Students’ Union President Kanupriya of the left-wing organisation Students for Society took part in a protest organised by SAD (A), Dal Khalsa and United Akali Dal on 15 August. 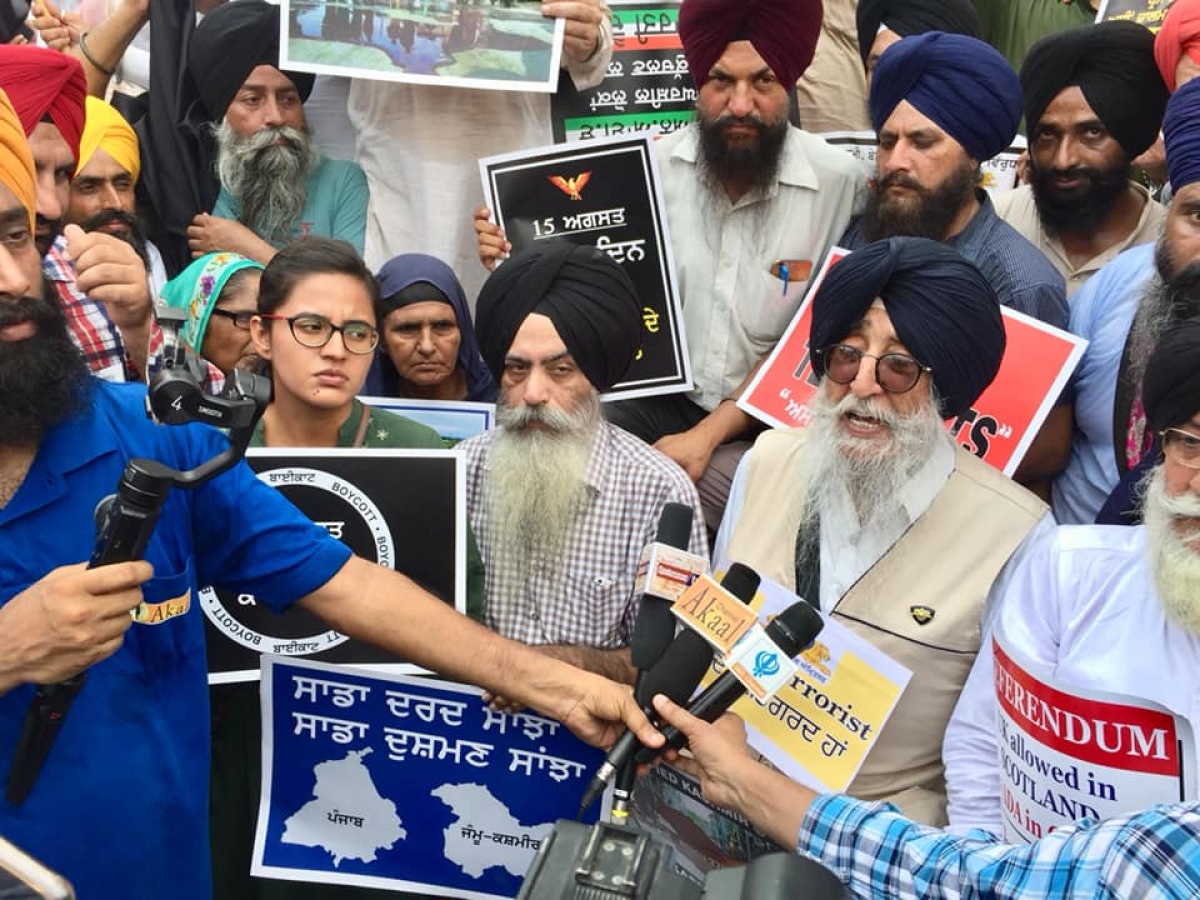 “The Left and Sikh organisations in Punjab spent three decades at odds with each other over militancy in the state but agree today on one cause: their condemnation of the Centre’s decision to revoke Jammu and Kashmir’s special status,” wrote senior journalist Prabhjit Singh.

Many observers cite historical reasons for Punjab being one of the few places in India where agitation over Kashmir is rife.

According to veteran journalist Jagtar Singh, “One has to go back to history to understand this relationship of Punjab with Kashmir. Guru Tegh Bahadur, the ninth Sikh Master, sacrificed his life for the human rights of Kashmiris. The issue is not whether they were Pandits or Muslims. The State behaves in the same manner. He offered himself to be martyred in Delhi. He was staying at Anandpur Sahib where he was approached by Kashmiris to protect their human rights.”

Jagtar Singh and several other observers also cite the fact that Kashmir was part of the Sikh Empire, and was given to the Dogras in 1849 after the second Anglo-Sikh War.

Further, many Sikhs compare the current situation in Kashmir to what Punjab faced during Operation Blue Star in 1984, arguing the involvement of “deliberate humiliation of a minority community” in both.

The Quint had earlier reported on how Sikhs consider the abrogation of Article 370 as history repeating itself.

The widespread outrage over Kashmir in Punjab has become a dilemma for both the ruling Congress as well as for Opposition parties in the state.

The Congress had voted against the government’s decision to scrap Jammu and Kashmir’s special status in both Houses of Parliament, and its MP from Anandpur Sahib Manish Tewari even spoke in the Lok Sabha. However, many party leaders – especially those from the Hindi heartland – later supported the government’s move.

Punjab Chief Minister CaptainAmarinder Singh unequivocally opposed the government over the Kashmir issue but has also decided to clampdown on protests, made evident in how the administration withdrew permission for the protest in Mohali.

The Shiromani Akali Dal is facing flack from all quarters for supporting the government and going against its own stand in the Anandpur Sahib Resolution and the 1967 elections, where it had demanded special status for Punjab.

The Aam Aadmi Party supported the government in the Parliament but its sole MP in the Lok Sabha, Bhagwant Mann, stayed away during the debate on Kashmir. The party is also wary of raising the issue in Punjab as it could harm the party in Delhi.

One politician who has been giving statements against the government’s Kashmir policy is former Leader of the Opposition Sukhpal Singh Khaira of the Punjabi Ekta Party.

“Jammu and Kashmir was practically a Union Territory for the Government of India anyway. The Army rules the roost there, chief ministers are practically appointed by the Centre… but by bifurcating the state government and reducing it to a UT, the government’s main aim was to humiliate Kashmiris and rub salt into their wound,” he said in a recent interview.

“This is the government’s way of telling minorities that they have no place here,” he added.