The statue will be installed at the main entrance of the Bagh and inaugurated by Union home minister Rajnath Singh. 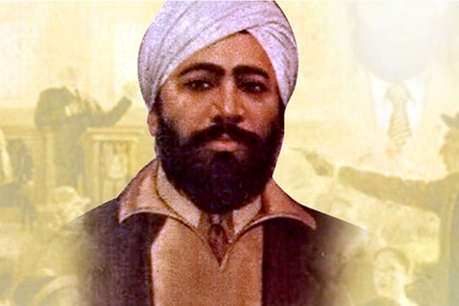 A statue of freedom fighter Sardar Udham Singh is going to be inaugurated at the Jallianwala Bagh in Amritsar on March 13. The initiative is being undertaken by International Sarab Kamboj Sabha, an NGO, which had been demanding installation of the statue since four decades.

Sabha’s general secretary Jarnail Singh Dhot said a 10-foot marble statue of Udham Singh, in a portrait of taking the pledge to avenge Jallianwala Bagh massacre, will be installed on March 12 at the main entrance of the Bagh and inaugurated by Union home minister Rajnath Singh on March 13. He said the statue has been prepared in Rajasthan at a cost of Rs 10 lakh.

He said the NGO had conducted a candle march in July last year in New Delhi demanding installation of the statue and it was approved by the central government.
“We were trying to get the assurance of Rajnath Singh’s presence and finally got it on March 13. The statue will be inaugurated by the minister during a function. Singers Pammi Bai and Rupinder Handa will also grace the occasion,” Dhot said.
“Our society had been struggling for last four decades to have the statue here but in vain. Finally, the central government gave us a go-ahead,” he added.
Dhot further said that thousands of tourists visit the Jallianwala Bagh daily and know about the massacre of April 13, 1919. “But not as many know about Shaheed Udham Singh who avenged the brutality of British Colonel Reginald Dyer. We are inscribing a brief history of the martyr with the statue so that the tourists know the complete history,” he said.
Dhot added, “The date is auspicious as it was March 13, 1940, when Udham Singh killed Michael O’ Dwyer (at Caxton Hall in London), the lieutenant governor of Punjab at that time who endorsed Dyer’s action of the massacre. It will be a true homage to the Shaheed.”
Meanwhile, Amritsar deputy commissioner (DC) Kamajit Singh Sangha also confirmed that he received a message informing that Union minister Rajnath Singh was coming to inaugurate the statue. However, he said he was waiting for an official letter regarding the same.
ADD TO COMMENT